Like people with autism, this cat—whom we call Vlad—is uncomfortable in social situations. Although he will stare out of the window at people and other animals as they make their way along the road that runs along two sides of our property, he heads for the hills the when someone knocks on our door or rings the bell. If he happens to be nearby when a visitor approaches or walks through the front door, he’ll stand frozen in place as if hoping to go unnoticed or pretending to be a sculpture. If he manages to either escape notice or pass himself off as a work of art, he will remain in place until the newcomer moves to another room—when he can slink silently off to watch from behind plant or piece of furniture and await the chance to make a clean getaway.

In addition to being uncomfortable with visitors, Vlad is unnerved by change. Although most cats are rattled to one degree or another by strange smells, sounds, or scenery, Vlad takes fear of the unfamiliar to a level I’ve not seen in any of the 20+ felines I’ve lived with since 1985. When we moved to our current home four years ago, he would pee on virtually any box we opened but did not immediately unpack. In his defense, it was his first and only experience moving, but reloca-phobia doesn’t explain why he wants to dampen every package that comes through the door. Nor does it explain why he doused the Princess’ new boots last fall after she returned from a visit to her grandparent’s home, or why he saturated the lovely baskets I bought to stuff full of wine, chocolates, candles, and other goodies for three of my friends. They say change is hard, but it’s even harder when you’re wired weird.

Also among the many manifestations of Vlad’s feline autism is an avoidance of eye contact. While even unfriendly cats when looked at will stare back at you with a sort of casual disinterest or disdain, Vlad won’t look at your face—never mind your eyes—as long as you are looking at him. This makes it hard to communicate with him, which I guess is the point since he has no interest in any interaction he does not instigate. And while most cats will look at you when you talk to them or call them by name—before ignoring you, scoffing at you, or deigning to move in the direction of your voice—Vlad will do none of the above. From the position of his ears, the terror in his eyes, and the visible tension in his body parts, you will know he hears you and understands your intent—that is, to get him to look at you or join you on the bed or sofa. And you can pretend he’s just being coy or taking his time responding like a snooty celebrity or star athlete on a power trip, but in truth he’s just eyeing all the exits in case you decide to express your interest in him physically, and preparing to initiate countermeasures.

That’s not to suggest he won’t allow anyone to touch him. In fact, Vlad can be quite loving when he wants to be. It’s just that again, it must be of his own volition and at a time and location consistent with his mood. Unfortunately, this usually means five o’clock in the morning or eleven o’clock at night when the Jarhead and I are trying to sleep and can barely make out his long, midnight black body in the dark. If he’s lucky and one of us is awake, he will get the attention he needs. If he’s not, he’ll get gently booted from the bed. If he persists, he may succeed in convincing one of us that it would be easier to pet him and get it over with. Unless, of course, it happens to be a weekend and we have nowhere to be in the morning, in which case one of us will muster the energy to pick him up, set him in the hall, lock the door, and go back to bed.

Now and again, Vlad will visit me during more convenient times, such as when I’m in the bathroom or at my computer, but if it isn’t dark and you’re not busy, you can almost always forget about petting Vlad. This poor guy finds the idea of uninvited physical contact so repulsive that he’s learned to thwart any attempt to touch him almost before you’ve mentally committed to making the effort. Assisting him in avoiding unwanted affection is his coat, which features insanely long and sensitive guard hairs that allow him to feel your aura, and which prompt him to flatten each section of his body from his head to his tail as your hand moves through the air above him.

If he does—by some miracle—allow you to pet him, for God’s sake don’t look at him while you do it. You can look at Vlad or you can pet Vlad but if you try to do both you will overload his circuits and he will bolt. And once he bolts, don’t bother to look for him because you will not find him. The cat is not graceful but he is quiet and patient so he can tuck himself away and avoid detection until you’re sure he has succumbed to dehydration.  Moreover, if you do spot him don’t try to catch him because you’ll fail and, more importantly, your attempts to do so will only drive him deeper under cover. So talk to him without looking at him or touching him. Or pet him without looking at him or talking to him.  But for the love of Mike, never do two of these things at once. 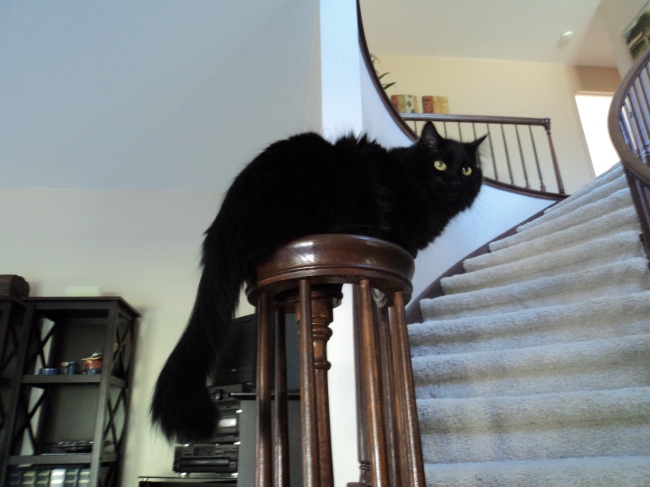 It bears mention here that we don’t always follow this rule ourselves. In fact, although we know it’s wrong to tease the disabled, sometimes we can’t help but tease Vlad. Like when we pet him and tell him how much we WANT to look at him. Or when we look at him and talking about how we would LOVE to pet him. We know it’s unkind to torment the less fortunate, but we simply can’t help ourselves.

Meanwhile, we spoil him just as we do our other cats with love, treats, and catnip. And he shows his appreciation by bringing four to six freshly ‘killed’ bouncy balls, fabric mice, and other prey to our room each night for us to admire when we wake up in the morning.

It occurs to me as I write this that these objects may not be the gifts we’ve taken them to be, but rather warnings of what could happen to us if we don’t watch our step. With that in mind, we may have to change our ways. Because, although I’ve yet to hear of anyone being murdered by their own cat, as I’ve said many times in this very forum, one can never be too careful.

Readers who have scanned my bio have already heard of my love for cats, while those who know me personally would describe it more like idol worship. At this point I’ll spare everyone the debate and just admit that my fondness for felines verges on addiction or obsession, while shrugging off suggestions that I should make some attempt at reform or recovery.

Like others with my affliction, I’ve had a lot of cats over the years. Some of them were not literally MY cats since I would hold, pet, and play with them without the benefit of a license, ownership papers, or even a common-law understanding that I was responsible for their support, but as they say: Why buy the cat when you can get the meow for free? Besides, more than one of my cats—and by that I do mean my very own cats—were borrowed or stolen from me over the years—one of them by the wife of my high school principal who cunningly lured Gato to her lair with heavy cream and then convinced him he’d be happier living in their two-story ranch home on the hill than he would be under the steps of our mobile home.

For example, there was Festus, a gray tabby who was bow-legged, blind in one eye, and—like the Gunsmoke character by the same name—spoke in meandering sentences with a heavy southwestern accent and would generously douse with his signature fragrance the shoes and clothing of any human in possession of a Y chromosome. (Okay, only part of that was true, but you’ll have to figure out for yourself which elements are bogus.)

It was always interesting taking Festus to the vet. I say this not because I suffer from Munchausen Syndrome by Proxy or have no other useful purpose for the Jarhead’s hard earned salary, but because invariably the person who would call us into the exam room would misread the name on his chart as Fetus, which would cause everyone else in the waiting room look each other with disdain or concern. This would become only that much funnier when the dumbass saying it would shake her head or make a face as if WE were the weirdoes.

Not long after adopting Festus we acquired Electra. She was a fluffy brown tortie who had normal legs, eyes, and toilet habits, but lacked a tail and had an affinity for sleeping in trash bins. Fortunately she would tip them over before climbing inside, or who knows how long it would have been before she found her way home from the landfill to voice her displeasure at our lack of attention to detail.

And then there was Louis XVI, who had long beautiful blonde fur with fine white tips, and a tail so voluminous we suspected he was born to a lion who had shagged a snow fox. Within days of adopting him it became apparent why Nature made him so gorgeous: She needed to ensure that someone would want to provide for him because if he’d had to survive by his wits alone, he would have died moments after weaning.

Of all the cats we’ve had over the years, our all-time favorite is an old female I’ll call the Duchess. I would never admit aloud she’s our favorite for fear of causing her housemates irreparable emotional harm. But since none of them know how to access the Internet, or can read well enough to learn of my bias, I think I’m safe in writing about it.

Despite her nickname, the Duchess actually comes from humble beginnings. Born in a box behind a discarded mattress in a garage in Licola, Italy in 1996, hers is the classic immigrant success story. A black domestic short hair, she was to be named Uhura after the beautiful and elegant communications officer of the Starship Enterprise. But only moments after bringing her home it became obvious that she would never be as graceful as her namesake, so we chose something more befitting her self-assured personality and enormous head and ears.

Since joining our family, the Duchess has put us through a lot—starting with the 12 hour trip from Europe to the US when the Jarhead and I finished our assignment in Naples in 1999, during which she yowled nonstop about, presumably, the food, the water, and substandard accommodations. To be fair, I don’t really know what she was yowling about, but to this day if you put her in a carrier, she will yowl herself hoarse unless you place it directly in front of an air vent and set the fan to hyper drive.

I could go on for hours talking about my cats—or your cats, your neighbors’ cats, or lolcats—but, alas, the Duchess is calling for her dinner, and it’s not polite to keep a lady waiting.