France has the Eiffel Tower. Italy has Vesuvio. And Weyauwega has its ponies. It has a lot of other things, too, but today we’re going to talk about the ponies.

To be clear: I don’t mean ponies in the technical sense of the word, which (according to our old pal Wikipedia) in the singular–pony–officially refers to smaller, compact breed of horse with a slightly thicker mane than the average equine. Nor do I mean ponies in the fantastical sense of the word, which (according to my formerly five-year-old daughter and a significant number of her peers) lovingly refers to a smaller, highly prized breed of plastic one-toed ungulate with resplendent, multi-color manes and tails, symbols called “cutie marks” stamped on their butts (which are simultaneously the most adorably deceptive and politically correct synonym for livestock branding you’ll ever read here or anywhere) and a diverse and devoted following of obsessed fans.

Rather, I’m using the word ponies in the diminutive sense, as one does when saying kitties to refer to cats, puppies to refer to dogs, or bunnies to refer to rabbits. Or like when someone uses the phrase ‘playing the ponies’ to make off-track betting sound less like gambling or to jokingly convey to the detectives on Law & Order that someone else’s harmless pastime may be in fact a serious problem.

You may be surprised to find horses included on a list of reasons to love Weyauwega. Especially since Weyauwega is geographically part of the Midwest (as opposed to the Old West or the Wild West) and doesn’t have a significant number of living, breathing horses within its borders, the town has a relatively high number of non-living, non-breathing horses adorning its streets, signs, and other fixtures. The perhaps unsurprising explanation for the ubiquitous equines is that the city leaders—past and present—wanted to recognize the importance of horses to the history of the community by adorning the place with images of them at work and play.

Incidentally, a similar phenomenon occurred with respect to the Native Americans who originally lived and traded in the area. Although the city leaders chose to recognize the importance of Native Americans to the history of the community by giving it a Native American name and, later, by designating the Indian as its high school’s mascot, there are proportionally fewer living, breathing Native Americans residing here (.2% of the population, to be exact) than there are images or likeness of them around the community. I’m not suggesting that the disappearance of the horses or the Native Americans are in any way connected, but I won’t be seeking recognition from my newly adopted city any time soon, lest I disappear and/or wind up replaced by signs, statues, or swizzle sticks bearing my likeness.

The first ponies I’d like to present are these four lovelies. 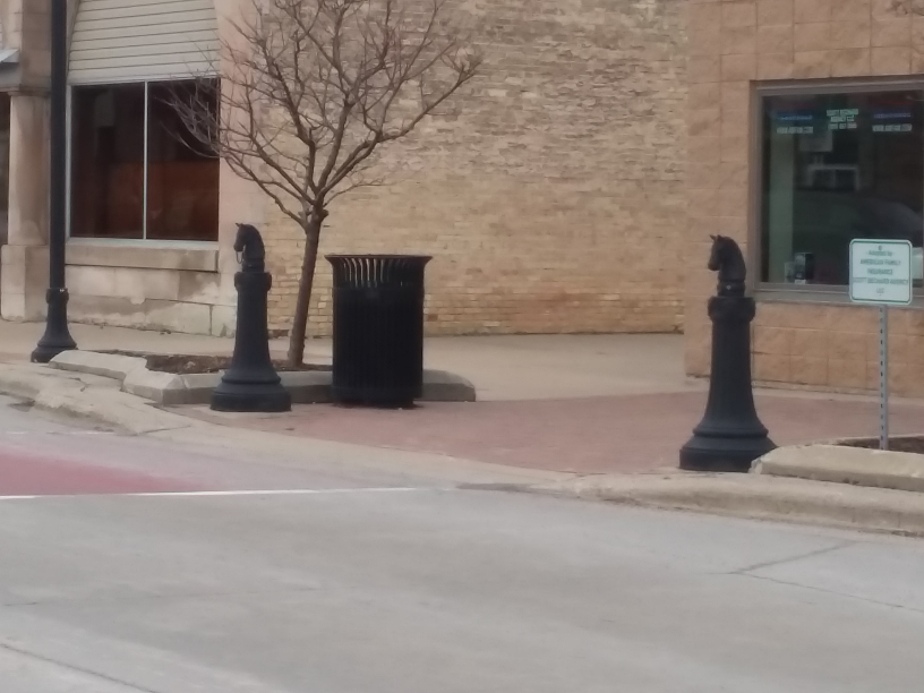 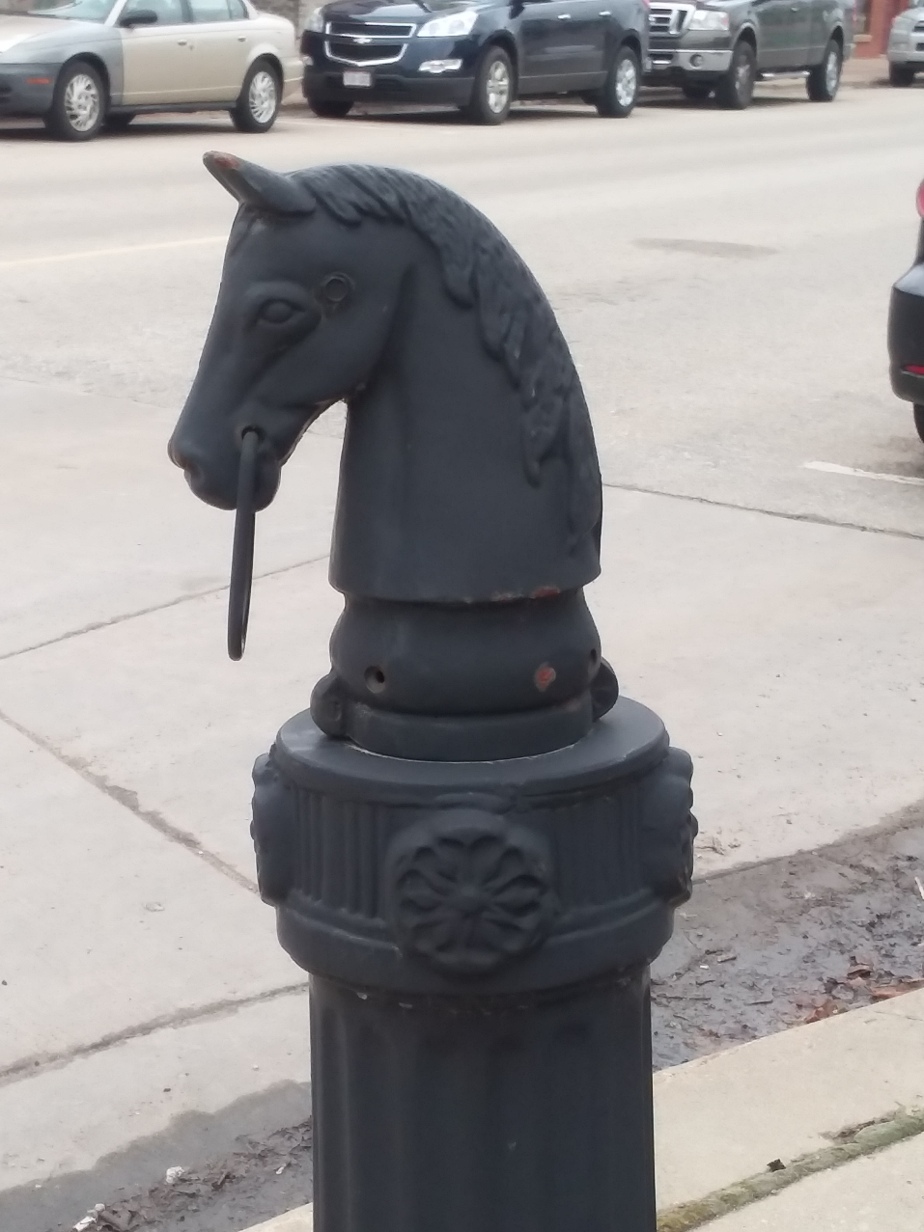 Resembling hitching posts, they stand, two by two, on the north and south ends of the central crosswalk on Main Street. Their metal bases are cast in the same shape as many of the lamp posts lining Main and Mill Streets, and are maintained thanks to the generosity of Weyauwega citizens, businesses and civic groups.

Speaking of lamp posts, if you ever get the chance to see Weyauwega for yourself, you’ll want to be on the lookout for these beauties. 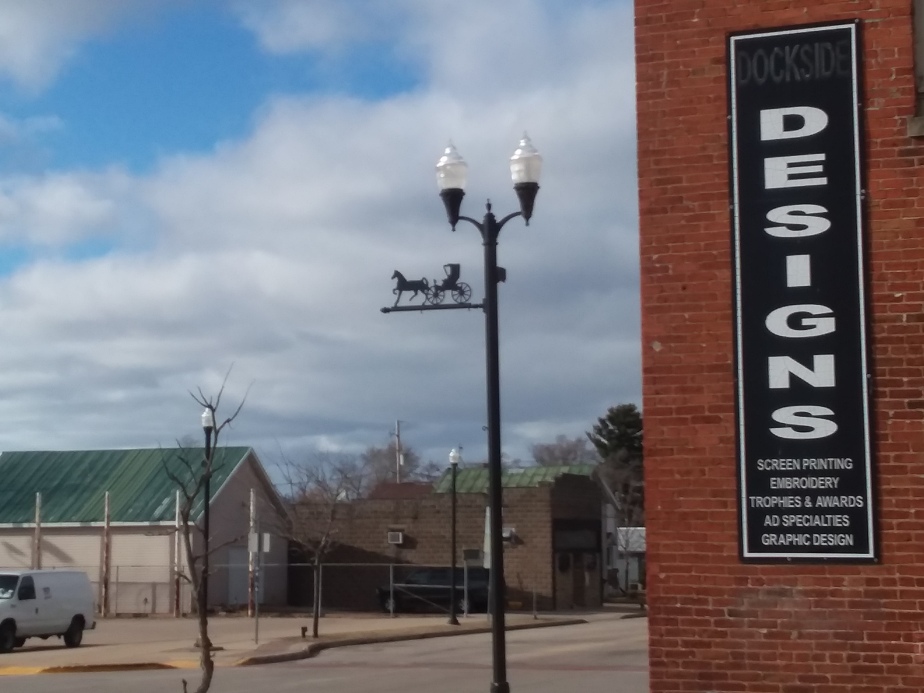 As you can see, these ponies can be found, accompanied by a buggy and driver, atop many of the lamp posts along the main drag as well.

While you’re in town, you may as well drive around enough to see this pair of ponies. 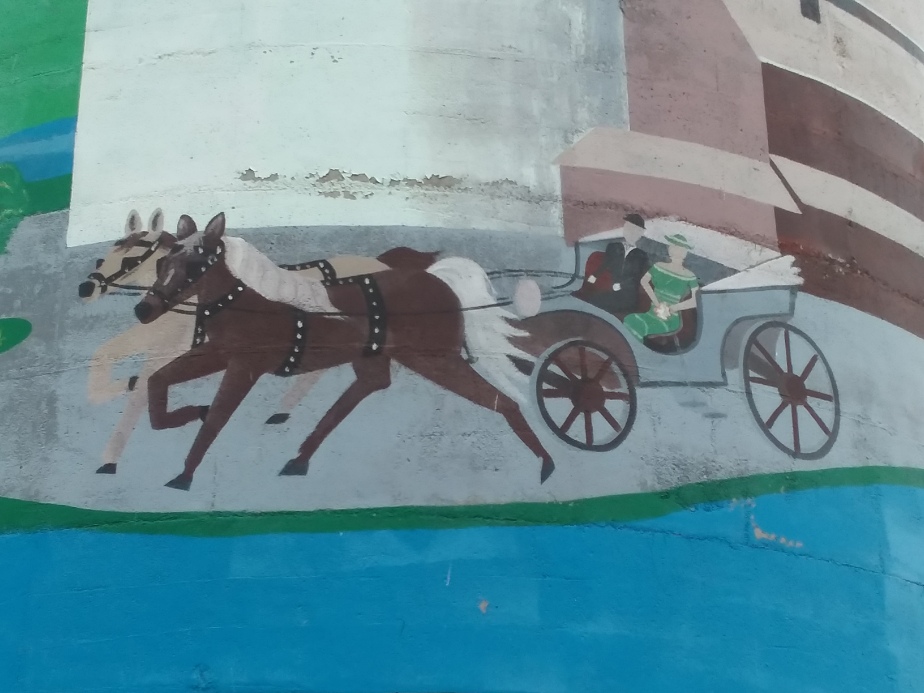 They appear on the west side of the old mill silo on the north end of town. In addition to this team of ponies and its carriage, the tower also bears several images that are of cultural significance to the city, just as totem poles of the Native Americans bear carved images that are/were of cultural significance to their communities. For the Wikipedia photo of the tower, click here.

If you can spare the time, head east on Main Street and hang a right onto Lincoln Street. From there it’s just a few blocks before you reach the entrance to the Weyauwega Senior Village (aka my future home) where stands the sign bearing another pretty pony.

If instead you head north from Main on Mill Street, you will find the city’s largest pony. 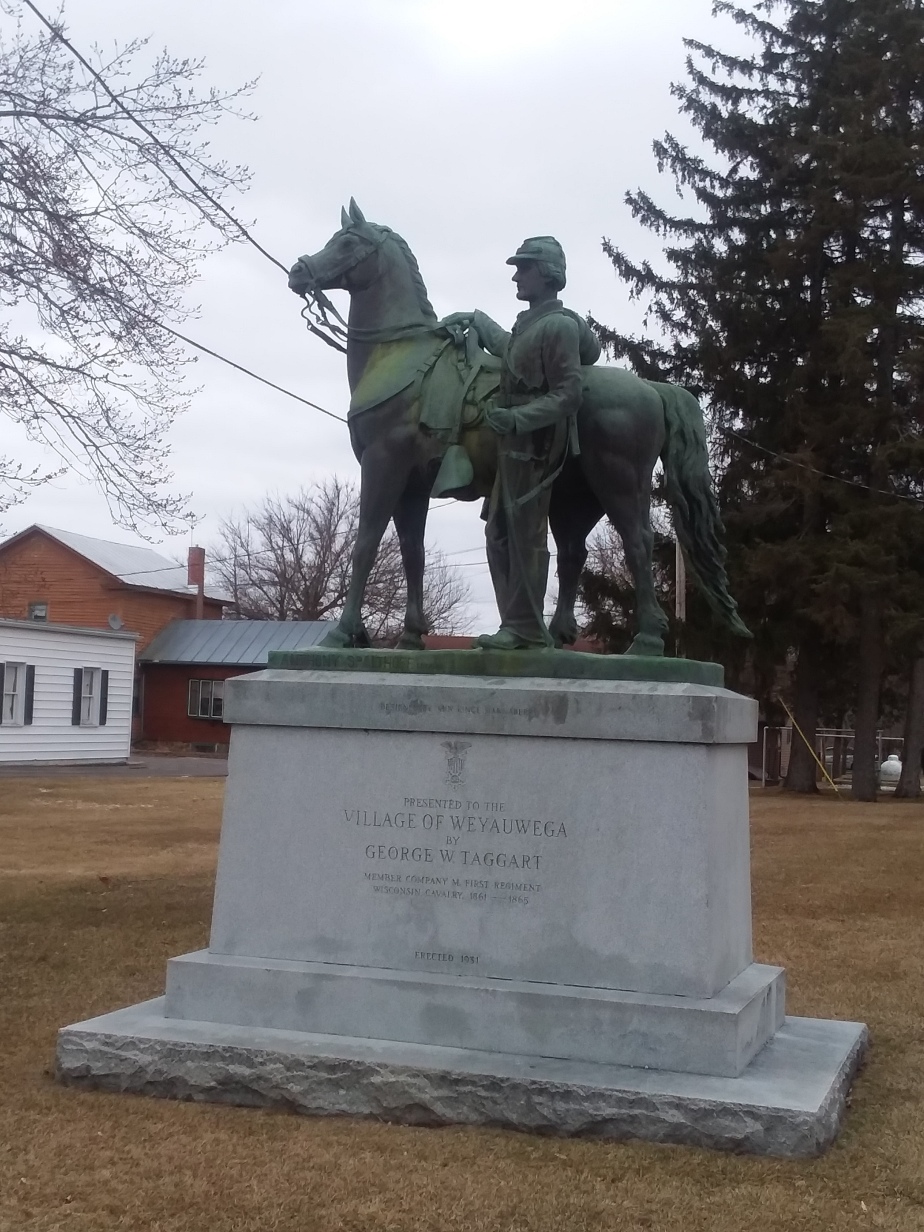 He or she is part of the Taggart Civil War Cavalry Monument donated by George W. Taggart. According to the Weyauwega Historical Society, Taggart was a veteran of the American Civil War and the First Wisconsin Cavalry, who presented this statue to the City of Weyauwega in 1931.

The final photo in this post WAS going to be of a gorgeous, life-size bronze statue of a horse rearing back on its hind legs. Unfortunately, after spending more than 9 years at the corner of Main and Pine Streets, the statue is suddenly and inexplicably gone.

That’s right. Hoping to provide a photo of the amazing and detailed creation for this blog, the Jarhead and I drove over to the corner of Pine and Main streets only to discover the sad, sawed off remains of its wood and metal mount sticking out of a berm beside the sidewalk.

I seriously could not believe my eyes. Or my luck. For more than 9 years, folks driving through downtown Weyauwega couldn’t miss the blooming thing and then days—perhaps even hours—before I’m scheduled to capture it for posterity—boom! It’s gone.

Disappointed, the Jarhead and I drove all over town—arousing the suspicions of untold numbers of residents, visitors, and local law enforcement officials—as we searched every yard, driveway, street, parking lot and alleyway in hopes of discovering it standing with its front legs raised high in at its new home. But alas our efforts proved fruitless.

I’m hoping it was taken down for maintenance and due to be back on display later this summer. If so, you can count on me to provide a photo of it all spiffed up and clean. But for now, we’ll both have to settle for this street view image captured by Google Earth in 2009.

It doesn’t begin to do the subject any justice, but I suppose it’s better than nothing.

Meanwhile, thanks for tuning in again for 10 Reasons to Love Weyauwega! With any luck, the items I plan to discuss in the next post won’t disappear before I can photograph any of them!